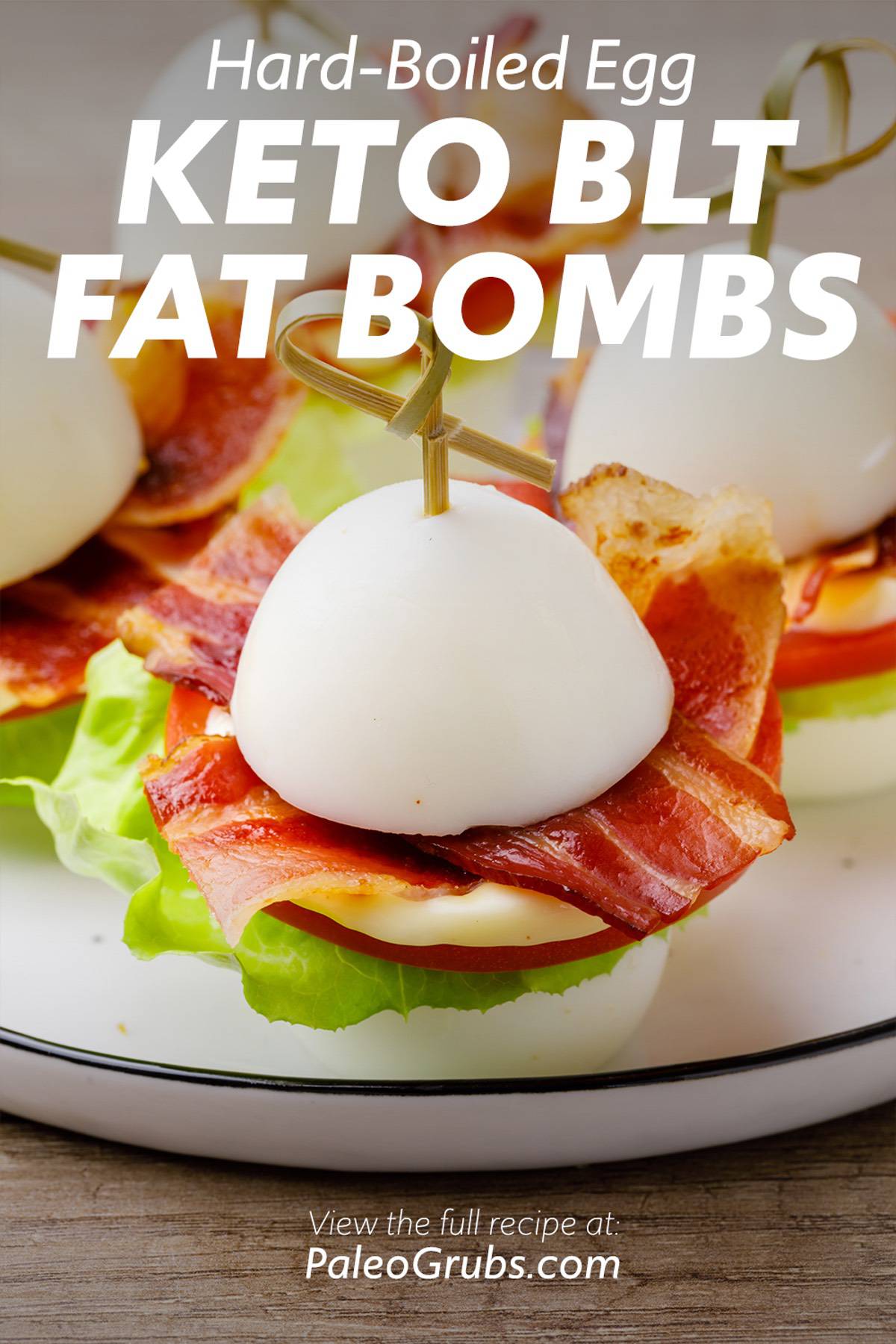 The first thing that you’ll want to do when making this recipe is fry your bacon slices in a skillet over medium heat until they’re nice and crispy. You can then slice each of your hard-boiled eggs in half, lengthwise. 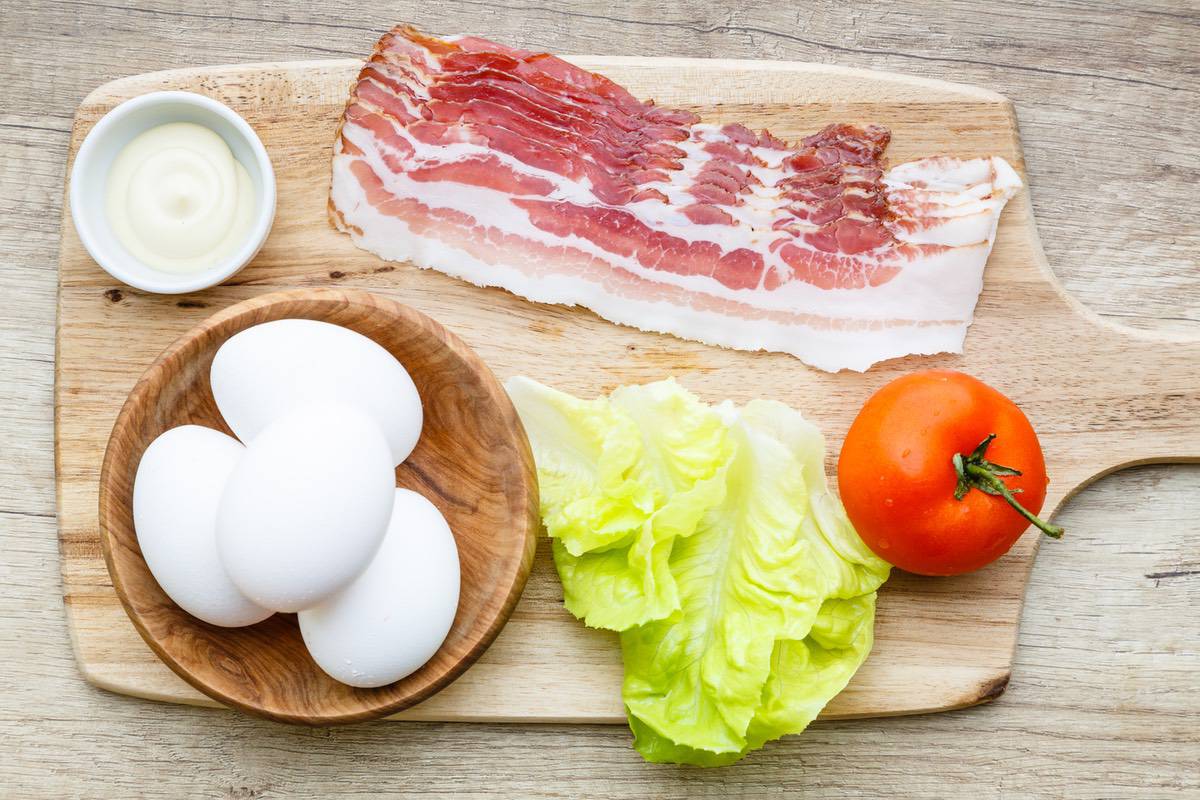 Next, you’ll be putting a single teaspoon of mayonnaise (I have an amazing paleo mayonnaise recipe), one slice of bacon, one slice of tomato, and one lettuce leaf between each of your egg halves. To finish them off, secure them with a toothpick and you’ll be all set to serve them. 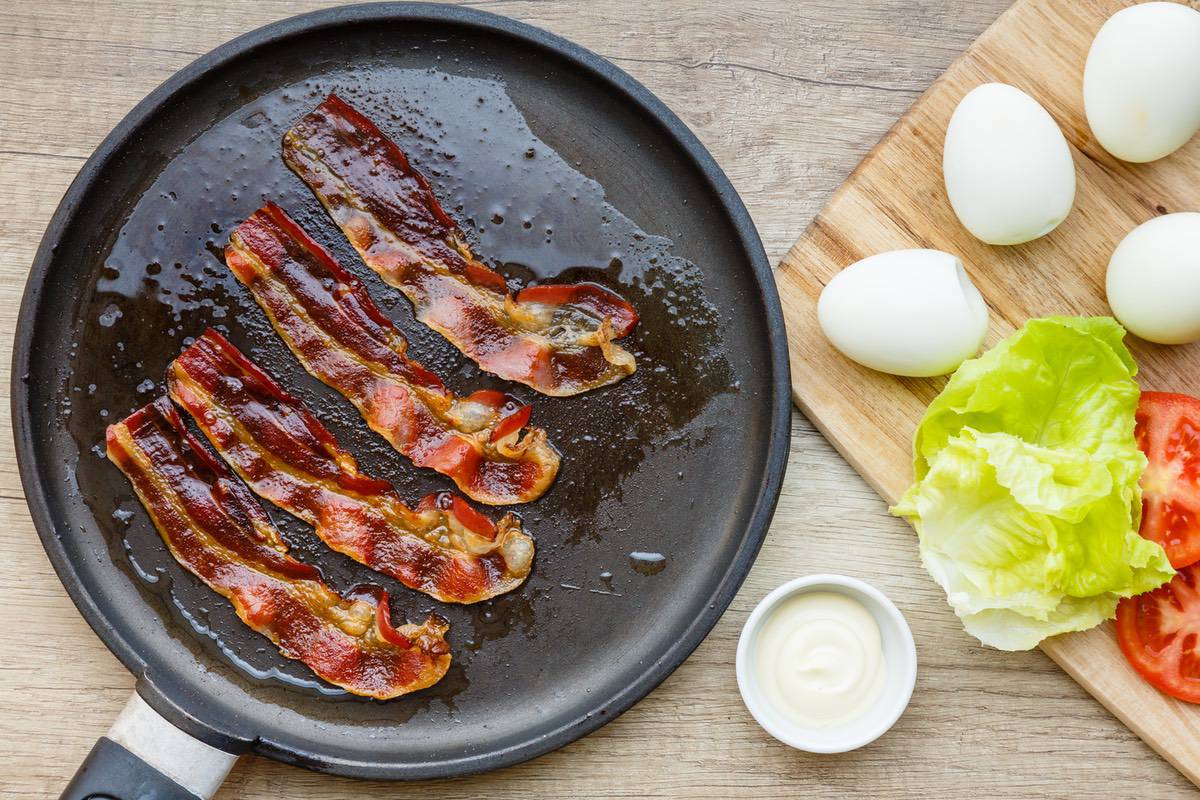 One of the biggest reasons why I love this particular fat bomb recipe is because I love love love eggs to begin with. I’ve even made my own list of egg recipes you can make everyday!

They’re versatile and definitely one of my favorite things to snack on while following the paleo diet because of how incredibly nutrient-dense they are.

Eggs are an excellent source of saturated fat, protein, dietary cholesterol, and essential vitamins and minerals. And contrary to popular belief, eating whole eggs doesn’t significantly increase your risk of heart disease. Dietary cholesterol may even have quite the opposite effect, according to studies! (1)

What is a Keto Fat Bomb?

Keto fat bombs are made up of delectable fat-heavy keto friendly ingredients. They can be enjoyed as a snack, dessert, or even as a full blown keto meal replacement!

Fat bombs are typically made with both coconut oil, a nut butter, or some type of high fat dairy like heavy cream as a base, and then additional ingredients are added from there. 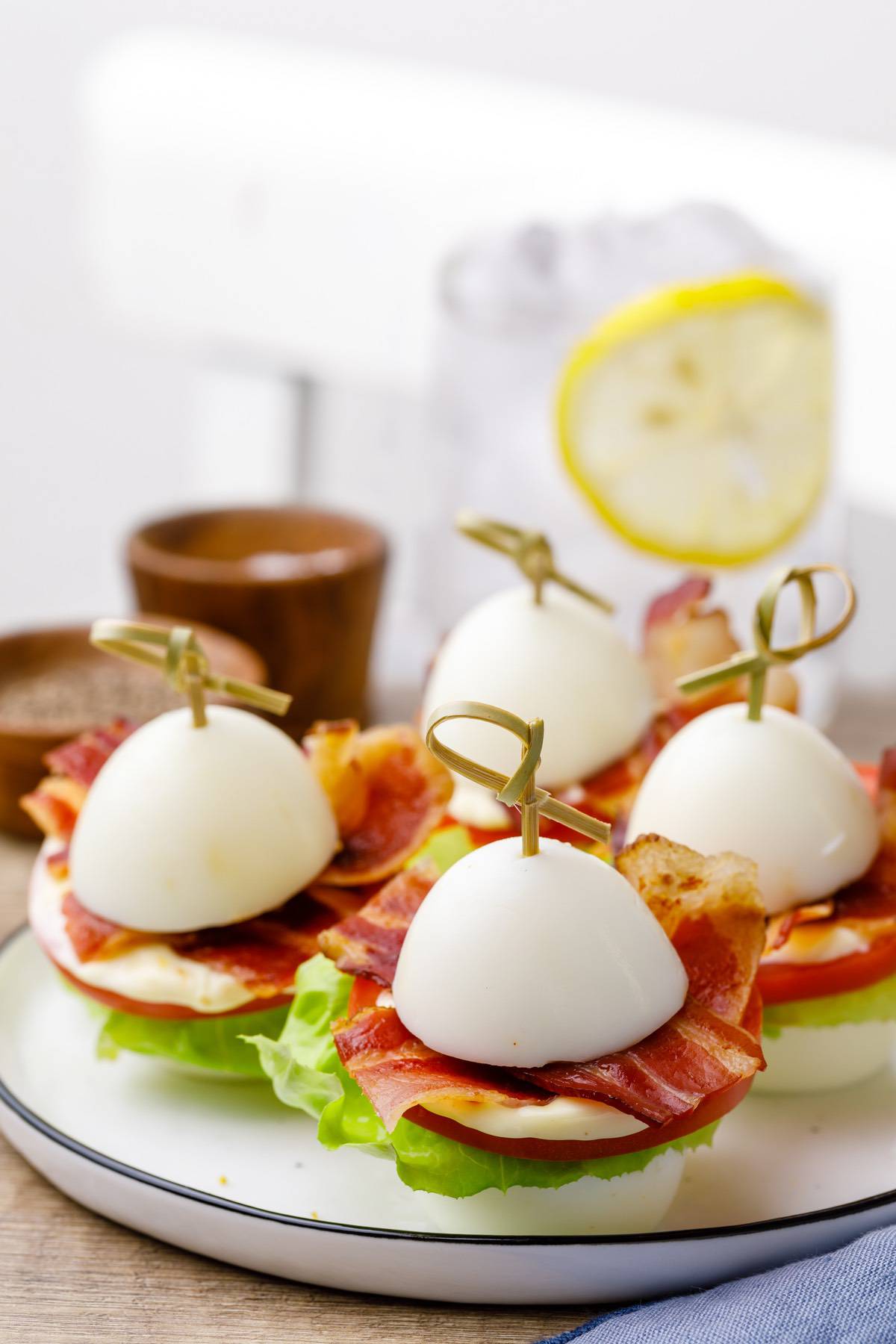 With that being said, you don’t necessarily need either of those ingredients to make fat bombs. This egg BLT recipe is 100% proof of that!

Making sure that you properly boil your eggs is an essential step to making sure that these BLT keto fat bombs turn out as good as they possibly can.

The optimal boiling time for making hard-boiled eggs is widely accepted to be about 10-12 minutes over medium high heat.

On the other hand, if you would rather make soft-boiled eggs, you’ll want to bring your water to a boil and then lower it to a rapid simmer. Add in the eggs and cook for approximately five minutes for a runny yolk, or for seven minutes for a yolk that’s more firmly set. 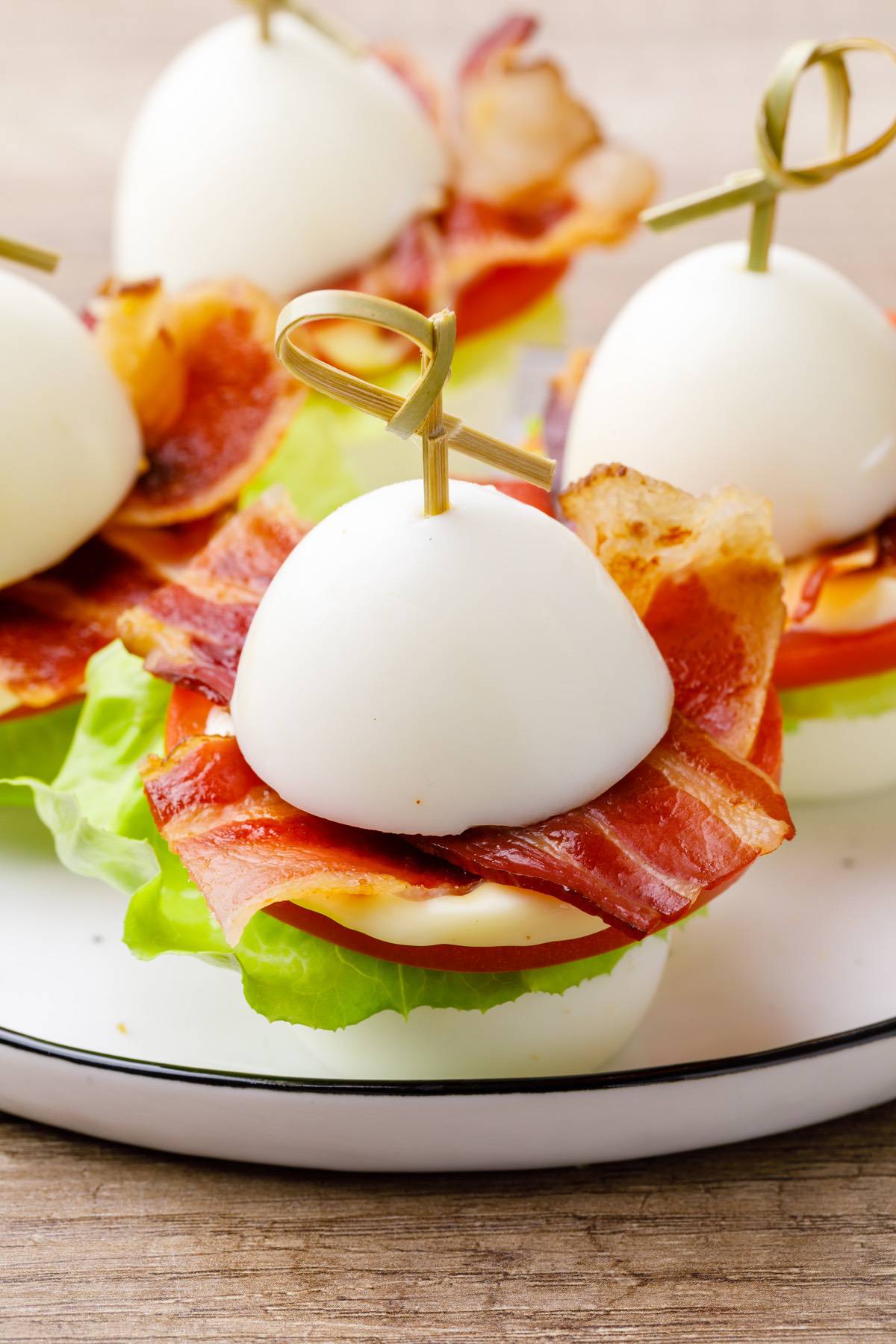 What About Dietary Cholesterol? Isn’t That Unhealthy?

Once upon a time certain food groups were heavily demonized because they were incorrectly believed to be associated with cardiovascular diseases. People were advised to either avoid or use moderation when it comes to eating foods like whole eggs, red meat, and real butter.

The evidence shows that dietary cholesterol has next to no effect on excess LDL cholesterol levels. Instead, dietary cholesterol actually works in tandem with saturated fat to form the essential building blocks for the male hormone testosterone. This also explains why so many people report an increase in testosterone levels after switching over to high fat, low carb diets. (2, 3)

FEEDmyFIT is a meal delivery service company located in Meridian, Idaho that creates nutritious meals to fuel athletes and those looking for a healthy diet. The views and opinions expressed in this article are strictly those of its authors and were not written by FEEDmyFIT. This article was originally published by Paleo Grubs.
Previous Dark Chocolate Drizzled Paleo Apple Nachos
Next Apple Cider Vinegar, Lemon and Ginger Gummy Bears

31 Fudgy and Decadent Paleo Brownies Everyone Will Love